The Howey Mansion Music Series provides people of all cultures and backgrounds the opportunity to enjoy jazz and classical music through innovative and engaging presentations by highly skilled artists set in the magnificently restored historic 1920’s Howey Mansion. All of our concerts include an educational component so that audiences of all ages can gain an appreciation for the rich classical and jazz music heritage and ensure that these traditions will continue for generations to come. 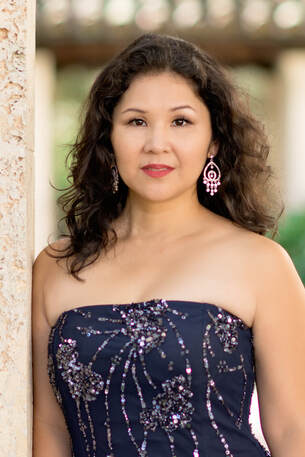 After traveling extensively as a classical soprano and seeing live music played in beautiful palaces and festivals around the world,  Arisa Kusumi Sullivan has dreamt of creating a music series for over 15 years before founding the Howey Mansion Music Series in 2018. In her eyes, the historic mansion is the perfect venue to breathe new life into musical treasures.  Her mission is to bring classical and jazz music to the spotlight at the Howey Mansion for Central Floridians to enjoy, and thus ensuring that this rich heritage is carried on and appreciated for generations to come.  When The Cowherds purchased and lovingly restored the Howey Mansion, she immediately asked if she could make her vision a reality at this unique historic  site.

In her own singing career, Ms. Kusumi Sullivan has performed around the world, including in Europe, the US, Mexico, and Japan. An internationally acclaimed concert and recital singer, her career highlights include performances at Marlboro Music Festival, the Verbier Festival in Switzerland, Villecroze Festival of France, the Austrian Embassy in Washington DC, Bach Festival Society of Winter Park, Mozart Society of Atlanta, and the Robert Schumann Philharmonic in Germany.  Her prolific opera career includes over 300 opera performances at such companies as the San Francisco Opera Center, the Chemnitz, Halle, and Osnabrück Operas of Germany, Vadstena Akademien in Sweden, the Xalapa Orchestra in Mexico, and as Pamina in Mozart’s Die Zauberflöte with the Orlando Philharmonic Orchestra. She was a prizewinner at the Verbier Festival, the International Robert Schumann Lied Competition, as well as being a finalist in the Joy in Singing Competition.  A magna cum laude graduate of the Eastman School of Music, she received further training at the Bavarian State Opera Münchener Singschul’, and the Ravinia Festival Steans Institute.  She studied voice with Carol Webber, Benita Valente, and Marni Nixon. As a teacher, Ms. Kusumi Sullivan has given masterclasses at University of North Carolina – Chapel Hill, University of South Florida, Bob Jones University, and served on the voice faculty at Rollins College from 2012-2018. She currently is the Executive and Artistic Director of the Howey Mansion Music Series, she is on the voice faculty of the Vienna Summer Music Festival, and maintains a private voice studio in Orlando, FL.